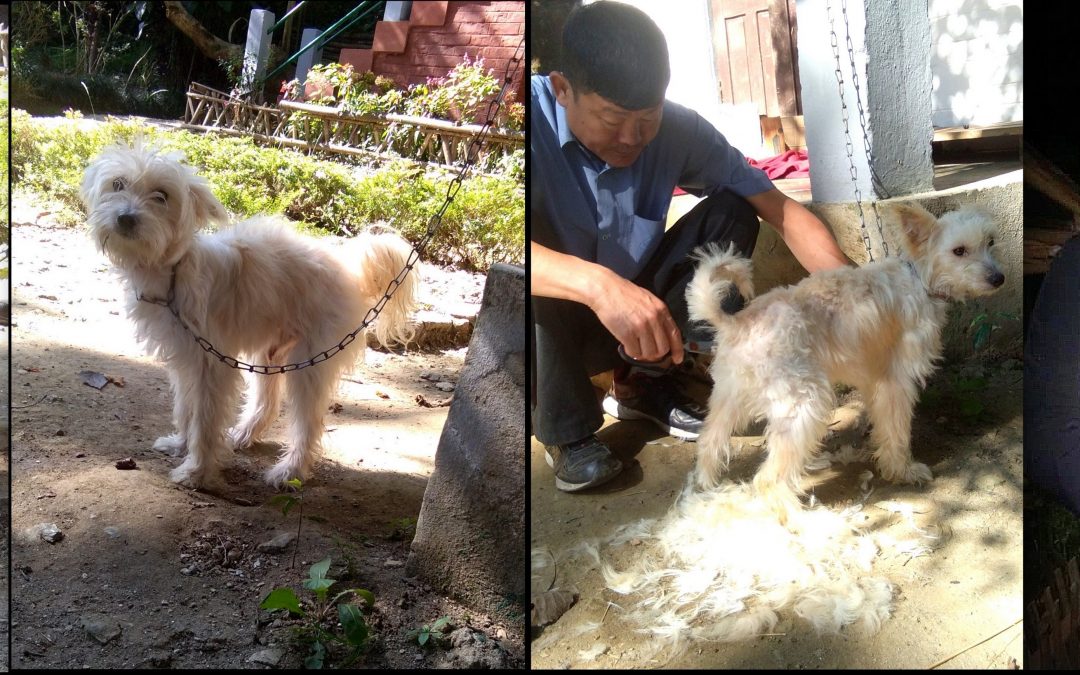 Dog chained up all night long against the pillar of
Kalimpong Animal Shelter by his owner and thus, abandoned forever finds a home

It was a cold morning in November, with the onset of
winter, Shelter dogs and puppies were huddling together, with their lazy yawns
and mild screech after the chilly weather getting on their skin. They did not
want to get up from their bed and start their day.

On the other hand, Shelter cats were desperately
waiting for the sunrise to bask under the sun and sleep all day long after
their morning meal.  The Animal
Dispensary was open and owners were bringing their dogs for their health
check-up.  While animal attendants were
taking a round to check upon Shelter dogs, there, they saw a white dog with his
long chain tied to the pillar on the Shelter premise. It was an Apso dog,
fluffy and cuddly but he was left alone there, nobody by his side.

His eyes were a little sore from the cold and he was
stuck there chained and with bated breath.
The dog was in need of help, somebody to free him from that chain. So we
went closer, and unchained him. He began to wag his tail and circle round us. But
his hair looked very unkempt; he had matted knots all over his body. We then decided
to trim his hair, give him a good warm bath.
Due to fleas, his body was a little sore from allergies which was then
treated.

But back in our heads, we only had one question, why
would somebody leave a nice and friendly dog chained up at the Animal Shelter?
What could have gone wrong with the dog? Although, it wasn’t the first time a
dog was left stranded at Kalimpong Animal Shelter it was a big concern for us
seeing the dog tied up to the pillar without food nor water the night .Alas!
The world has lost compassion today and has become impetuous. Dogs are said to
be man’s best friend but this is what we do to them on many occasions. This sad
dog depicts misery and the sad fate of his thereafter when abandoned but he was
blessed to have found the Animal Shelter that helped him in his short journey
to finding him a home.

He was a friendly dog, we named him Scruffy. We gave
him a nice warm bath to help him with his allergy. He groomed him and cleared
off all his matted hair .Now that he lost most of his fluff that made him look
thin but his fleas were all gone and he was clean and free from allergies. He
ate a very good meal at the Animal Shelter and was living happily. But a nice
dog like him needed a home that could meet his requirements. Therefore, we at
Kalimpong Animal Shelter were in constant search of a loving home where he
could be rehabilitated easily.  While in
search of a loving parent, we came across many but we felt that if the dog was
kept near by the Shelter location it would be easy to treat and make a home
visit on this neglected dog by his owner.

Finally, in a week’s time, we found him the right
parent and he was all set to go home, happy and a little excited. His new
parent came to the Animal Shelter to adopt him by sundown, and spent a little
time with Scruffy then wrapped him well and took him home by his car. Scruffy
with his bulbous eyes once looked at us and bade us goodbye.