Animals are less in comparison to humans in number yet they are not given the right kind of living. They are the voiceless, but they could sense and feel everything around them. There are ample dogs living on the streets that are either abandoned owners or chased by their owners. In this way, the dogs’ population keeps multiplying and when they don’t have a place to stay, the last resort is to make streets their home and depend on a few passersby who could give them a hand. The sight of strays being poisoned or hurt by their human friends while on the road deeply saddens a man who has always taken dogs as his best friend but to all it is never the same.

While Darjeeling animal shelter emerged as a new organisation solely for animals, it was a respite for the strays of Darjeeling. The strays at main town areas and even far are thus checked from time to time and 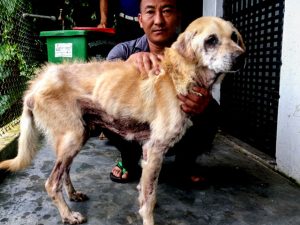 vaccinated against rabies making it a safe environment for pedestrians and locals to pass by.

It was in mid October, 2017 when a rescue operation had to be undertaken   by Darjeeling animal shelter team after Darjeeling, the Queen of hills woke  up from its deep slumber due to long indefinite strike. The rescue team  then got the opportunity to spot a few dogs that were ailing from various  diseases and fungal infections. There they found a dog about four year old  ;  he was shy in nature with a little erratic behavior. He was infested with   mange; his coat had lost enough hair to shed his skin again. His eyes were  completely shut and his patches on his body made him look like a dog  without a coat. He couldn’t even walk nor his body could muster up some  energy left in him, and it was found out that he was also suffering from dehydration and malnutrion. The staff approached the dog and treated him well and fed him some goodies and slowly they caught him and brought him by animal ambulance to the shelter for the much needed veterinary care and treatment for all his ailments. The saline was administered on him for dehydration with multivitamins, and after a span of three days of saline, his treatment for mange started.

When he first got his meal at the shelter he was tempted to eat, but he had to stay away from his temptations because of his poor health. In days’ time when he recovered from dehydration he wanted his meal so bad that he was ready to   snatch away the other furry friend’s mea 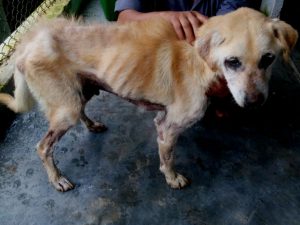 l too, and then he got the smell of   dry food that he had never tasted his entire life but, it was lip smacking to   him and he couldn’t wait to grab the bowl and finish it .His treatment   against mange followed on a weekly basis and in just three weeks, his fully   shut eyes opened up and he could clearly view the world. His coat began   to   shed fur in between those big patches and it was a sign of recovery   which made the rescue team happy. He still got about a few more courses   of antibiotics and shots till he fully recovers and walks with pride in his  new  avatar with his well grown fur.